Does Your Baby Spend Too Much Screen Time and Too Little Tummy Time?

Posted by namelynewborns on Jan 28th 2020

Does Your Baby Spend Too Much Screen Time and Too Little Tummy Time?

A new baby is overwhelming for a first time mom or even a veteran mom if the new baby is fussy. In our age of easy fixes and gadgets; the average mother can choose from dozens of devices to entertain baby. There are walkers and jumpers, swings, mobiles, tapes and screens are easy solution to placate  baby and give mom some much needed rest seems harmless. If baby is securely  tucked into a high chair or stroller and put in front of a tv or even given an i touch to hold, chances are he will calm done and maybe with a little luck even fall asleep.Then mom can do errands or get some well deserved rest.

The important question is are these simple innocuous fixes , not as benign as they appear. New studies tracking the health of mothers and newborns are showing some very interesting data. "  In  a world that encourages inactivity.....an innovative new study of physical activity patterns during a child's first year of life" babies may be moving too little and there is evidence of health issues relating to obesity and increased body fat in this new generation of inactive babies.

" The study which used tiny activity trackers to monitor babies" movements found associations between infants squirming, kicking, crawling or stillness and the levels of fat around their middles, raising provocative questions about just how early any links between inactivity and obesity might begin." Evidence has been mounting that Western world children are more sedentary than their counterparts in the rest of the planet. According to a recent study , most school age kids in the U.S. sit as much as 8 hours a day, while toddlers as young as two or three can be inactive for 90% of their waking hours.  This facts are concerning because we may be raising a generation of inactive children that face much higher risks of becoming overweight or obese. Years ago, parents would put encourage kids to go outside for free play;This  new generation of parents have planned activities which are usually indoors.

"So for the new study , which was published this month in OBESITY, a group of researchers from Johns Hopkins University and other institutions decided to fit baby size trackers to infants' ankles and watch how they wiggled. " There were over 500 boys and girls from different socio economic groups. The researchers visited the babies in their homes every three months weighing and measuring the children.  There  were clear correlations between the babies who were more active and those that were not.  As you would guess, the babies who moved the least had the most fat around their middle.

Dr. Benjamin-Neelon said " Infants who are heavier who gain weight too quickly in the first year of life tend to be heavier children later.  These heavier babies were spending a lot of time in strollers, car seats and high chairs. Most of these babies engaged with screens for two or more hours a day.

The conclusion was that parents and caregivers should limit putting infants in restricting devices for long periods of time. So the question is what kind of activity can a baby under a year participate in. when they are not walking or even crawling? Dr. Benjamin - Neelon suggested that babies need to spend more supervised time each day moving on the floor as long as the environment is safe. "Tummy time allows infants to lift their heads and develop and strengthen upper-body muscles."

Our customers have always told us the importance of tummy time; but now we have hard evidence from a qualified research team that supports this. Tummy time is best on one of our soft adorable belly blankets. Baby will become addicted to his friendly plush toy with a cute head and a soft body to roll on. Belly blankets can be thrown down in the kitchen, playroom or media room. We don't recommend leaving a baby unsupervised on their belly blanket because you can't guarantee that baby will say put. But we can guarantee that they will love this plush mat and if you buy it as a baby gift, your friends will be eternally grateful.

There are many cool styles which include, bears, elephants, llamas to name a few. At NamelyNewborns we offer you an opportunity to add baby's name or monogram which will make this fun gift a keepsake. 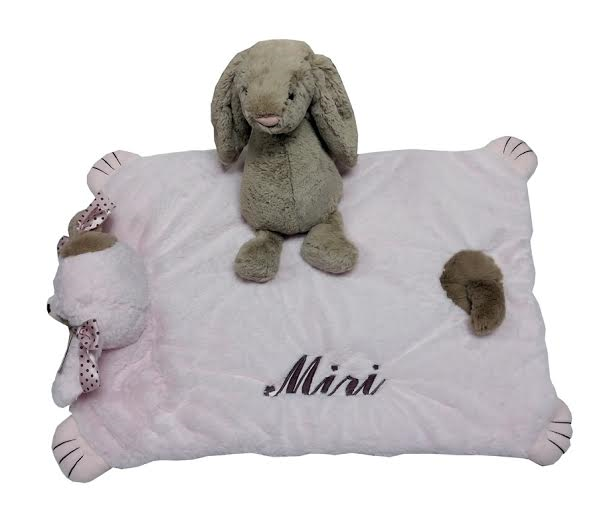