We have often wondered what happens if after a  while you decide that you don't like your baby's name?

Namely Newborns has been personalizing baby gifts since 2003. Since the beginning of our business career we have embroidered an unbelievable number of baby names. These names range from classics like Jonathan and Emily to the most unusual names imaginable. A baby's name is really important. It is his or her identity for the rest of their life. Be careful and thoughtful when picking his passport through life. Most parents are usually thrilled with their choice. They love to talk about the name and have it embroidered on everything that decorates baby's nursery. Sometimes, however, the choice has been contested. One of the parents doesn't like it or the grand parents object. These can cause a lot of stress and can be the source of marital arguments. Usually a name is forever. Although it is not impossible, it is not easy to change a name so this is a very important decision for the new parents.

Most baby names fall into these general categories.

Trending for years were the airport names like Reagen and Kennedy. Then there were the library and museum names like Whitney and Morgan. Moms and Dads wanted to be original so they named their baby's with acronyms of their own names. Blankets were personalized by our company with names like Jomarsh and Terrijohn as well as inspirational names that reminded the parents of where the baby was conceived. If your parents were vacationing in Georgia you might be named Savannah; but if they honeymooned in Malaysia your name might be Kula. If your parents loved nature; you could be named Moon or Forest.

Names for twins are an especially imaginative challenge. One couple named their identical twin daughters Rebecca and Vebecca. Another set of twins were named Ronnie and Ronald. The strangest name was told to us by a intern working in the obstetrics rotation at a local hospital. Here a woman at loss for a name and not able to leave the hospital until she decided upon one; settled on the name on the identification bracelet " Female". She thought it was pronounced FAMOLLIE and she said to the young intern:" I chose this name because it was already on her wrist bracelet".

Famous celebrities have added to the confusion. When Gwyneth Paltrow names her kids Apple and Pear ; the average mom thinks she can use a crazy name as well. Once we embroidered Baby A and Baby B on blankets as a shower gift for unborn twins; the mom was so happy with the names that she used this medical way to refer to twins as their real names on their birth certificates.

Unisex names have made our gift wrapping a night mare. How does one know if a turquoise blanket embroidered in gray for Jaeden is for a boy baby or a girl baby? What color ribbon do you use for a baby named "BLUE". If we are not careful in our inquiry we can offend a customer who thinks we are judging their baby's name. Do we ask a customer who selects a navy blanket and requests hot pink embroidery thread; if she has made a typo? Or do we assume that she is super stylish and wants the Chanel navy and pink color scheme? Personalized stuff is not returnable and we sure don't want an angry mom upset that her best friend sent her little girl a blue blanket.

Some parents want a traditional name that has been in the family for generations. Others might ever choose a family name like Finley or Johnson for a first name. Some parents want their baby's name to be unique. They want their child to stand out. One mother told us she didn't want to pre assign the child's sexuality; she wanted the name to be gender neutral so that the child could choose his identity.

Sometimes, family members like mother-in-laws and sisters complain about name choices. One grandmother we knew never referred to her grandson by his first name because she couldn't stand the name; she referred to him as Baby and his last name. Often, a couple fights so hard to not fall into the trap of pleasing a parent; that they won't waver on a name choice even if they don't really like it because they don't want to give in to parental pressure. Remember that what seems adorable today; has to last your child forever.

We know the answer to what happens if the child doesn't like the name. My best friend named her child " Forest Light" because she thought the forest was the must beautiful place on earth and light was spiritual.  There may have been a happy Forest Gump; but  the little Miss Forest Light I knew marched herself into court when she was of legal age and changed her name to Michelle.

The question still remains is what if the parents decide after a few years that they don't like the name they chose.? Maybe, they were forced to name a child after a deceased or respected family member; or maybe, they just had a wild imagination and impulsively bestowed a name on their child and they now hate this name. What do you do if the child is named after his father and you and the father split? Now the name that you once loved; conjures us bad memories. What if you choose a family name from your husband's side as baby's first name and then divorce your spouse. You can go back to your maiden name; but the baby is stuck with his.

Believe it or not , there is an official name for this and it is called "baby name regret". Over 11% of the couples who pick a baby name later regret it and some actually legally change it. People agonize a lot more about name choices than they did in the past and there are services that will help in selecting a name as well as lots of resources on the internet. So the easiest solution is not to make a mistake and take your time in choosing the right name. But if you make a mistake. what are the alternatives? If every time, you introduce your baby, the name makes you want to throw up or you are mortified every time some asks you to spell the name or gives you a funny look; you might consider a name change.

If the name is hard to pronounce or you just feel it doesn't suite your baby; the easiest thing is to develop a nickname. A lot of boys are called "Buddy" or "Skip" and girls are referred to as  "Sissie" or "Honey" just for that reason. Some names have a natural nickname like Elizabeth and these girls can be called Liz or Betsy without legally changing the name. Henry's can be easily renamed Hank; Edward can be called Teddy.  Sometimes, a middle name can be used as the first name and then the problem is easily solved. Another clever solution is calling the baby by his or her initials. It can sound really cool to refer to a baby as J.B. Experts say that a baby doesn't respond to his name until 7 months so you have that window of time to decide if you really want to change the name or not. The latest time according to psychologist to change a name is by two years old so keep an eye on the clock if you are considering a name change.

If using a nickname, initials or middle name doesn't solve the problem; then a legal change can occur. Although you can unofficially call the baby by the new name until you legally change it, it is not final until  you legally make the change. Remember that for the rest of the child's life all documents like mortgages, checking accounts, health care, driver's licenses have to be consistent.

If your child goes by a nickname and all documents have his legal name; his life will be very confusing. Every year at the beginning of the school term; he will be embarrassed. When he doesn't answer roll call when his legal name is called, he will receive a lot of negative attention. He will get very tired of explaining that although Horace is his legal name; he likes to be called Buster. What ever you decide about your baby's name, the earlier you make the change the easier it will be for you and your baby.

Changing a baby's first new is the same as changing a last name; it requires a formal document.  Although, you can start calling the baby by the new name; it is not binding until you go through a specific legal process. This legal process differs somewhat from state to state, but in all states you need to ask permission from the court and obtain an order from a judge. This order allows you to change  your birth certificate and other documents. This process can be researched on the internet or you can consult your local attorney for assistance. It is usually neither expensive or lengthy; but it has to be done.

Once again, we urge you to pick a name you love. One that is easy to pronounce. and gives you great joy when you think about it. A name that is cute for a baby; must also be appropriate for a grown up. Make sure that the three letter monogram does not spell something that will cause the kids to tease your child like "Patricia Isabelle Green" or "Andrew Stephen Smith".  Try to make the first name flow with the last name so that the entire name goes together. 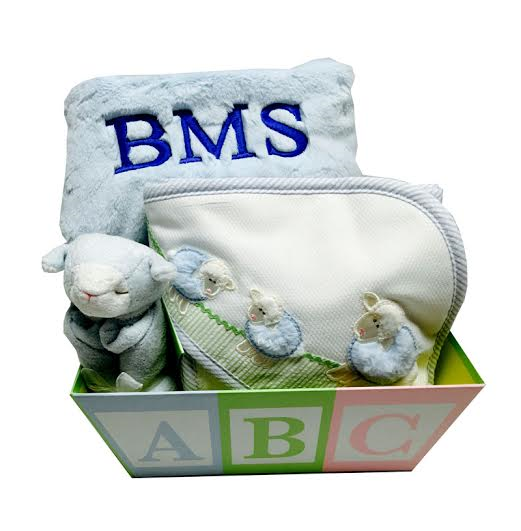 There are millions of sources to guide you in bestowing the perfect moniker on your newborn. Here is our short list of popular names that we have enjoyed embroidering on our baby gifts.  Below are the popular names for both boys and girls at the end of 2016. Following each name are the alternative names that are also favorites, but are bit more unusual .