Posted by www.namelynewborns.com on Aug 25th 2016

Not only are nurseries and baby blankets gender neutral with the color gray still the main star; baby names continue to blur gender lines.The rich and famous have always bestowed family last names on offspring. like Kennedy and Reagan. Movie stars started the trend years ago with Cher naming her kids Chastity and Blue followed by Gweneth Paltrow naming newborns Apple and Pear. Long ago a famous country song was about a "Boy Named Sue".

Today's stars Heidi Klum, Jessica Simpson and Drew Barrymore have chosen names for their daughters that coild easily be on a sports roster for an NFL team.  Lou is the name of Heidi's daughter; Maxwell for Jessica's little girl and Frankie for Drew's newborn.

According to an article in the NY TImes Sunday August 21,2016,"Today's parents have moved beyond the dichotomy of boy and girl names," said Linda Murray, the editor in chief of Baby-Center, which declared 2015 "the year of the gender-neutral baby". Millennials, in particular who are in their twenties and thirties and are of child bearing age don't want their children hampered by stereotypes.

In the late nineteenth century famous writers like George Sands took on male names because women were not thought intelligent enough to publish. Frankenstein the novel was written by Mary Shelly who went by the nome de plume M. Shelly so that her work  would find an audience. Today's parents want gender neutrality starting with a baby's name so that women have economic opportunity for non-traditional roles.

Same sex- parents , whose numbers are growing want to choose gender neutral names so that their children have an opportunity to explore their sexuality without being labeled girls or boys because of their names. They want to keep gender options open for their off spring.

The origin of names started with biblical names. Girls were named after females in the old and new testament and saints. Boys were named after Adam and Jacob in the old testament and then Jesus's disciples in the New Testament. The most popular boy's name is still the biblical Noah followed by Liam. The most popular girl's name is Emma and Olivia. A lot of girls all over the world are called Mary or Maria. Unisex names account for only a small percentage of names.. Of the 3.9 million babies born last year only 1.7 percent were given unisex names according to Nameberry's analysis of government data.

Gender - ambiguous names have been popular before. During the 1960's Forest and Rain were the thing.  These unisex names could be just a fad or a trend that may continue and fade. Only the test of time will tell. But one thing we do know is that parents love show off their baby's name on blankets. baby wipe cases and toys. Personalized baby gifts continue to popular at www.namelynewaborns.com and it is common to send a blue baby blanket to a baby girl or a pink sweater to a baby boy as parents continue to express the desire to give their baby total freedom in finding their identity.

The airport names like Kennedy have been popular for years. We have embroidered many gifts with Tyler and Taylor.; but this year's list includes names that we have never embroidered on any of our baby gifts like Winter, West and Gray. Jaedon used to be our most popular unisex name , but new names have replaced it. According to Baby Centre here are the top thirty unisex baby names. 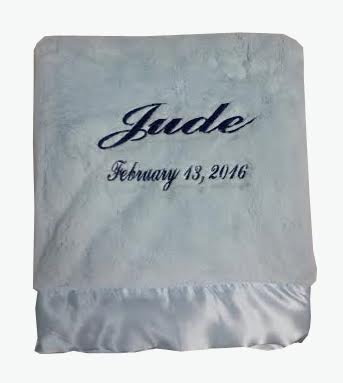